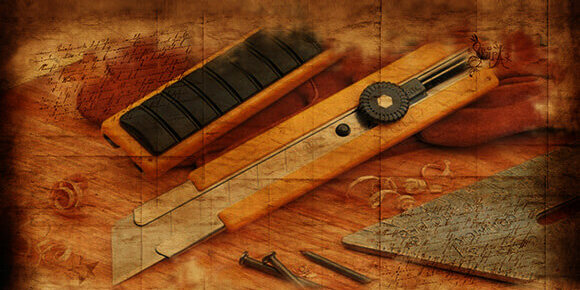 In 1956 year Yoshio Okada, the founder of the Japanese company OLFA, develops first in the world snap-off knife. The unique invention of Okada very quickly becomes the best-selling and most recognizable product in the world. The length, width, and angle of the blades developed by Yoshio Okada have become the world standard for snap-off knives.

How did Okada come up with the ingenious idea of creating a snap-off knife?

After World War II, young Yoshio started working for a printing company. His colleagues used knives or scissors to cut paper in the office, which Okada tough that this is very difficult. He was thinking of an idea of a knife, which can ease his work and that of his colleagues. He shares the idea with his brother Saburo and it was not long before he realized the brilliant idea for the snap-off blade.

The idea of creating a snap-off knife came from breaking chocolate chips and analyzing the blades of broken pieces of glass. Yoshio began working on a prototype, that can be safe, comfortable, in a practical shape, having suitable dimensions and sizes of the cutting blades.

After the snap-off knife is ready, Yoshio thought of selling this idea and whether anyone would even be interested in such a strange invention. That’s why he and his brother Saburo, founds their own company – OKADA. Yoshio spends his last money on making 3000 pieces of snap-off knives, which gradually began being sold at stores in Japan. The consumers discover how handy the tool is and the sales became rapidly increasing. In 1967, Yoshio Okada took the management of the company into his own hands, but in it, he is a partner with his brother and two more of his first clients.

The brand name had to create for the snap-off knives. Saburo suggests that the brand needs to be called OLHA, which in Japanese means “blade breaking”. Yoshio decides to change “H” to “F”, because in many languages “H” is not properly pronounced. And now the snap-off knives have their own brand and it’s now called OLFA.

For the design of the detachable knives, innovation was needed. The idea came to Saburo – the color of the OLFA snap-off knife should resemble that of an inside of an egg – warm and soft yellow color. This is a total change in the dark and dull colors of the instruments of that time, which made the OLFA snap-off blade knifes a total hit on the market. In 1984, OKADA was renamed to OLFA, with which she is still known even to this day. The company becomes a world leader in creating cutting tools for manual use.

As a result of continuous production and technological research, the quality of the cutting blades OLFA only became better and better. For the production of the blades for the rotary cutters and the snap-off knives OLFA, the company creates special cutters by specifying specific cutting angles, sharpening, size, and many other features.

This ensures an excellent balance between the high strength and extended lifetime of the cutters when being used to their extend.